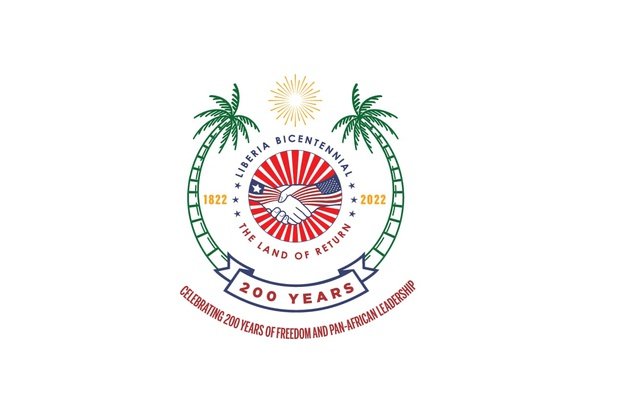 Monrovia, Liberia, December 3, 2021 - The Bicentennial Steering Committee for the planning of Liberia’s 200-year anniversary commemoration as a country announces the theme and slogan of the Bicentennial event, and the finalization of the logo. The event will be celebrated throughout 2022 from January 7 to December 10, 2022, with the official opening ceremony taking place on February 14, 2022. Liberia was founded in 1822 by free people of African descent from the United States of America.

According to the Steering Committee, the theme is "Liberia: The Land of Return – Commemorating 200 Years of Freedom and Pan-African Leadership” while the slogan is “The Lone Star Forever, Stronger Together.”

The Steering Committee says, this theme signifies three important historical milestones achieved by the country since it was founded in 1822 by free people of African descent and their patrons from the United States.

Firstly, the theme celebrates Liberia, in West Africa, as the land chosen as refuge by free people of African descent who endured many years of servitude in the United States, to settle as their home country. Consequently, under the auspices of the American Colonization Society (ACS), many of the free people of color emigrated from the United States and disembarked on Providence Island in Liberia on January 7, 1822 as their home country.

Secondly, the theme seeks to memorialize black freedom and nationhood and the determination for self-governance that began 200 years ago when Liberia was established in 1822. In an era when people of African descent were seeking freedom and self-determination, the founding of Liberia, “the Black Republic,” which gained independence in 1847 stood as the clear indication that Africans were capable of self-rule.

And thirdly, the theme acknowledges the pivotal Pan-Africanist leadership role that Liberia played, crusading for Africa’s decolonization and independence, including its uncompromising stance against the racial segregation in South Africa known then as Apartheid. Liberia would later champion the establishment of multinational unions on the African Continent and the global stage. Foremost, was its Pan-Africanist leadership role in organizing the historic 1959 “Sanniquellie Conference” involving Liberia, Guinea, and Ghana which ultimately resulted into the formation of Organization of African Union (OAU) in 1963. Liberia assumed similar Pan-Africanist leadership in the formation of the African Union (AU), successor to the OAU. It likewise joined the call on the Continent for creation of regional economic organizations, such as, the Economic Community of West African States (ECOWAS) and the Mano River Union.

And it was in similar spirit of Pan-Africanism that inspired Liberia to join other nations in supporting the formation of international bodies, including the United Nations, the World Bank, and the International Monetary Fund (IMF). As a Pan-Africanist leader, Liberia became the vision bearer and founder of the African Development Bank when the bank was established in the 1960s to foster economic cooperation on the African Continent.

It can be recalled that even while slavery remained legal in the United States until 1865, the resettlement efforts of the ACS culminated into the establishment of present-day Liberia in West Africa to relocate free black men, women and children from the United States and other people of color from other parts of the world. This led to the departure of the first group of about 86 free Blacks from the shores of New York in 1820. By the end of the 1800s, approximately 17,000 free Blacks from the United States and the Caribbean were repatriated to Liberia. Other people of color would continue to seek refuge in Liberia, the “land of liberty.”

Since their arrival, the settlers established self-governance in Liberia with Joseph Jenkins Roberts from Virginia of the United States serving as the first African American to be elected as president of a country. Subsequently, nine other American-born Africans from Maryland, South Carolina, Ohio and Kentucky served as presidents of Liberia, this first black African Republic.

The capital city of Liberia is named Monrovia after James Monroe, fifth President of the United States, a staunch supporter of the ACS and the flag of the country is a partial replica of the American flag to symbolize the strong relationship between both countries.

To preserve and uphold a strong bond of relationship with the United States of America, the settlers named most of the counties and cities of Liberia after a number of American States, notably including Maryland and Mississippi in Africa, amongst others “to continue to preserve their cultural ties with the places they came from in the United States.

The slogan shows Liberia as the Lone Star nation and the first independent black republic in Africa. Despite the country’s recent bitter history of conflict, Liberia has restored peace and stability and it remains stronger together as a nation through democratic governance. The country has held three successive democratic elections, which ushered in Mrs. Ellen Johnson-Sirleaf as the first democratically elected female president of the country and Africa. In 2017, the country witnessed the democratic transfer of power from one democratically elected president to another when President Sirleaf transferred power to President George Manneh Weah resulting from the outcome of a free, fair and transparent democratic election. This transfer of power was a significant milestone that the country has not achieved in more than 70 years.

According to the Steering Committee, the theme and slogan are designed to support the objectives of the Bicentennial Commemoration, which are to celebrate Liberia’s rich cultural heritage; to showcase the country’s tourism and investment opportunities; to reunite and reconnect African Americans in the United States and other blacks within the diaspora to their cultural identity in Liberia. A key objective of the Bicentennial commemoration is to also strengthen the rich historic relationship between the United States and Liberia dating back to the 1800s when Liberia was established.

To ensure the success of the Bicentennial Commemoration, His Excellency, President Dr. George Manneh Weah of the Republic of Liberia, is calling on all Liberians, the local and international partners and the diaspora communities to participate in this historic event to celebrate 200 years of the founding of the country by free people of African descent from the United State and other parts of the world, including the Caribbean and Europe; and the level of freedom and Pan-African leadership that the country has enjoyed, while showcasing the country as an ideal destination for tourism and investment.

Various subcommittees are assisting the National Steering Committee of the Bicentennial commemoration ensuring an inclusive measure to assure the success of the event. The President is calling on all Liberians and good friends of the country from around the world to work together collaboratively, irrespective of their social and political alignments, to ensure the success of this event for the overall benefit for the country.